Nintendo Switch: Hands On & first test with The Legend of Zelda - Breath of the Wild

Yesterday the Nintendo Switch arrived which led me straight to this Nintendo Switch Hands On Enticed article; Incidentally, the new console from Japan had the new Zelda game and a bag for mobile use including a protective film for the handheld display with it. Here is my preliminary and admittedly brief conclusion after a test lasting several hours (the last night was short).

Since I was out and about most of the day yesterday, I couldn't hold the switch in my hands until 20:00 p.m. My "test", the commissioning, the Day One update, playing Zelda BotW and so on kept me up until after midnight. But I was able to determine one thing: Nintendo didn't promise too much! The console is of high quality, the accessories are functional and first-class, everything is easy to use. At the first start there is a small introduction via the screen (console or TV) and then it starts. Check Joy-Cons for functionality, create user accounts and gamble! Wonderful!

It's amazing, by the way, how many used offers there are already one day after the release on Amazon ...

The Nintendo Switch is definitely not the first Nintendo console in my household. In addition to the old SNES and the Pikachu Nintendo 64, whose controller I am already renewed the Switch is now the newest member of the game brigade. Certainly but not the last;)

The Legend of Zelda: Breath of the Wild

I've played this game before its own article dedicated. But that was before the release. Now, after playing the game for a couple of hours last night, I have to say: The wait was worth it! Since I've been in the 90s for the first time The Legend of Zelda: Link's Awakening played on the Game Boy, I am fascinated by this series of games. With BotW, as the fans call it, I am once again convinced of Link and his adventures. So I will probably get up again as soon as possible to save Hyrule! At first I don't want to give details about the game in order to prevent spoilers. But I think even without a spoiler warning I can say: Finding out on your own that you need the old man's coat to reach the last two of the first four shrines is really not easy: D

I am enthusiastic about the operating system and the functions of the switch. I would like to mention in this Nintendo Switch Hands On article that not only the menu navigation and the settings are intuitive, but the hints and tips are also very helpful. Whether in the Nintendo eShop or in the "News" area: you always get the right information. I also think the connectivity is very successful. I didn't notice anything that one of the Joy-Con controllers is supposed to work / radio badly, as it could be read in some places. The WiFi connection could be a bit faster; Despite the cable internet, the switch showed low rates - the Day One update of the system and the Zelda game went quickly anyway;)

Protectors: yes or no?

Here is a small question for all readers with their own Nintendo Switch: Do you use protectors, i.e. covers for the controllers and joysticks? For example to protect the control units from wear and / or not to “downplay” the value of the console? If you use the following or similar Joy-Con protectors for the Switch, please leave a comment! 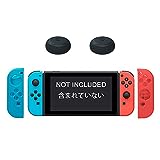 This little article is not enough for you? Then take a look hot online and G past; there you will get extensive and more professional insights. For example there is from heise or dem c't magazine Thermal images of the switch, which show how much it heats up during operation. The bottom line: you don't burn your fingers. Other, more technical and professional insights await you there.

More articles on the switch at Sir-Apfelot.de

As already indicated, there is also more information about Nintendo Switch in this blog. Here is a small selection:

What are your first impressions? Feel free to leave a comment on the topic! :)