Instructions: Replacing the battery on all Kindle models is easy to implement

If you want to replace an Amazon Kindle battery, that's no problem. In this guide I'll show you how to change the battery when Kindle-Main model, at Kindle Paperwhite and at Kindle Fire Tablet realized. The devices do not only hold together with easy-to-remove screws, but repairs and the replacement of individual parts are not impossible. In addition to the step-by-step instructions for the individual models, you will also find suitable tools and of course the replacement batteries below. Do you have any tips and suggestions on the subject? Feel free to leave a comment;)

Instructions: Replacing the battery on all Kindle models is easy to implement. Now change the Amazon Kindle battery yourself, also on Paperwhite and Fire models. Step-by-step instructions, videos and replacement batteries in this guide!

iFixit tool for technical devices and their repair

In order to repair Kindle devices, you not only have to remove one or the other screw, but first loosen the cover of the device. To do this, slide a piece of plastic into the corresponding grooves on the housing or battery cover. Of course, you can also use a knife, but objects that are too sharp or pointed can damage both the outside and the inside of the Amazon Kindle eBook reader. So if you don't have a guitar pick on hand, you should this set from iFixit help. It is inexpensive and contains the most important helpers for opening technical devices. There is also a bigger set with screwdriver and tweezers. 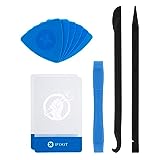 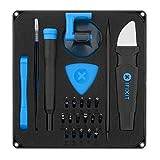 Before starting the instructions for replacing the battery, I would like to point out that the following statements are general lists of steps. The construction may differ depending on the model and device generation. When changing the battery, pay attention to the exact structure and see whether a normal plug-in interface is used instead of a flat cable, whether parts really need to be glued, etc. In addition, you are hereby advised that by opening the device and of course through Replacing the battery can invalidate the guarantee.

Let's start with the instructions for changing the battery in the standard eBook reader. The simple “Kindle”, which went through five generations between 2007 and 2012 alone, is probably the most likely to need a new battery. You can look up which rechargeable battery is intended for which model in the table under the next subheading. First of all, here are the step-by-step instructions:

Interestingly, you will search in vain for a Kindle replacement battery on Amazon itself. So if you want to get your eBook reader running again and prepare it for longer use without a charger, you have to switch to eBay. There are many different offers there. I have listed some of them for the respective Kindle models below:

Of course, you can also replace the Kindle Paperwhite battery with a little dexterity. Again you will first get a list of the individual steps (can vary depending on the generation) for the procedure; then the table with the replacement batteries for the individual models.

In order to be able to exchange the eBook reader battery, you of course need a new model that you can insert into the housing. In the following table you will not only find the various Paperwhite models of the Kindle, but also the appropriate batteries.

Since 2011, Amazon has also been bringing out its Kindle readers in the so-called Fire series. These devices are used not only for reading digital books, but also as tablet computers. Apps can be used on them, the web can be used and much more can be realized. The battery is stressed accordingly. For most models, the exchange works as follows:

Here, too, you have to switch to eBay again, as Amazon itself apparently does not sell any batteries for its readers and tablets or allows retailers to offer them. In the following you will find a model table as well as the batteries that I could find on eBay.

Sources for device generations and serial or model numbers: Click here , . and .

Tip to save the battery

If you want your Kindle Paperwhite to live as long as possible, you should refrain from plugging your Kindle into the power supply unit every night. Constant charging is bad for the life of batteries. Instead, you should first empty the battery to 20 percent or less and only then charge the Kindle.

In this way, the battery lasts longer charging cycles and you can use the Kindle significantly longer. A battery exchange can thus be postponed. I've been using my Kindle for four or five years - even though I read every night. So you can see: these battery tips are not only helpful in theory, but also in practice.