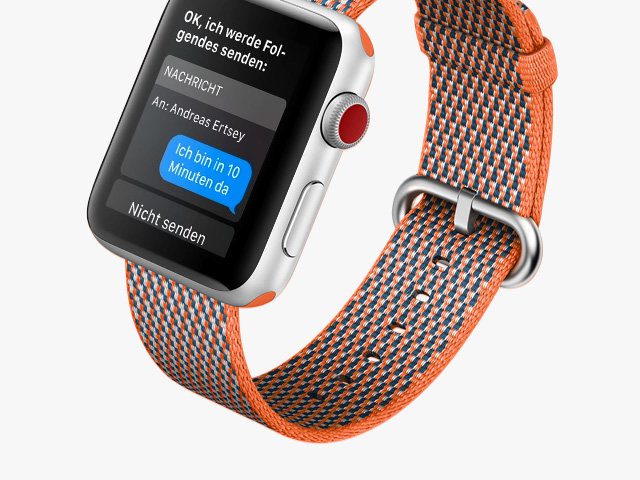 The Apple Watch Series 3 (or Apple Watch 3) was presented as part of the September Keynote 2017 and comes to you with watchOS 4 as well as many new functions, features and advantages. You can find information about the new smart watch from Cupertino in this post. In addition to the functions under watchOS 4, the interaction with the iPhone under iOS 11 and other information, I have also listed the price of the Apple Watch Series 3 models. So you are sure to find the right watch for your wrist;)

Like the iPhone 3 / Plus, you can pre-order the Apple Watch Series 8 soon. Data, features and innovations in watchOS 4 as well as prices of the models can be found here.

We were able to marvel at the Apple Watch Series 3 for the first time two days ago at the September 2017 keynote in the Steve Jobs Theater. You can find a summary of the Apple event here . In addition to the watchOS 4 operating system, the new Smartwatch from Cupertino has another interesting innovation: cellular communications. Without making the watch bigger or having to reduce the battery life, Apple has turned the display of the Apple Watch 3 into an antenna and now offers support for LTE and UMTS. LTE is currently the best cellular standard. 2020G is not expected to provide more performance in mobile communications until 5.

With the Apple Watch Series 3, which has an electronic SIM card (eSIM), you will be able to make phone calls and send text messages using the same number that you use with the iPhone. Calling and texting - the Apple watch has never been so independent. This is particularly helpful on vacation, for example, when you go to the beach and the sea or in the lake, but want to leave the iPhone at home / in the hotel / in the holiday apartment. Then you can still be reached, but you have a waterproof wearable on your wrist that you can take with you into the water.

As an additional feature, there will soon also be the option of using Apple Music Enjoy streaming music right on your wrist. Thanks to the Apple AirPods, for which there was no major update at the 2017 iPhone event, the music comes straight to your ears. In addition, you can certainly use other Bluetooth headphones. Tests and test reports on different models can be found here on the blog.

Siri is now also speaking on the watch

Siri is now fully usable on the Apple Watch 3. You can ask her questions, have her play music or start an app, you can give her tasks and the like. The good thing about it: Siri now speaks with watchOS 3 on the Apple Watch 4 as well. When you drive, surf the web or have anything else to do with your hands, you can simply let Siri do your tasks as a voice assistant. In addition, thanks to the new Apple watch, you can make phone calls, dictate and send text messages - practically via cellular networks via LTE and UMTS bands.

GPS is of course also included

GPS is also included in the Apple Watch 3 models that do not offer cellular communications. The individual versions GPS or GPS + Cellular I will list again below when it comes to costs. The price of the new smartwatch from Apple depends heavily on the model selected.

With average use, the third generation of the Apple Watch should also have a battery life of 18 hours. Despite mobile communications via LTE and UMTS of the eSIM, this should be possible thanks to the new dual-core CPU, which should be 70% faster than the Apple Watch Series 2. In addition, with the new W2 chip from Apple, Bluetooth and WLAN are 50% more energy-efficient. Theoretically, this results in a longer service life for the battery if you leave the cellular network deactivated on the 3rd generation of the Apple Watch - or only use it when it is necessary;)

Tips for emergencies: details on the SOS button and emergency call function can be found here

With regard to the price, you can rely on the data from the official Apple Shop. With a contract you of course have the option to pay off the smartphones and smartwatches monthly, but new devices without a mobile phone contract result in the following one-off costs:

The same prices apply to the new Nike models of the Apple Smartwatch (369 and 449 euros). But if you have too much money left over and are into luxury, you don't have to be sporty, you can also choose the editions with a Hermès bracelet. These only cost between € 1.249 and € 1.499;)

You can recognize the mobile versions of the new Smartwatch from Cupertino by the red dot on the digital crown.

The Apple Watch Series 3 is also available in the so-called Watch Edition. This is characterized by a ceramic housing; now in the two finishes Black and White. Both versions can only be selected with the combination of GPS and mobile communications and cost from 1.399 euros.

Matching the new Apple Watch 3 are the new Sport Loop bracelets, which you can get in the Apple Shop for 59 euros, as well as Apple AirPods, charging stations, charging docks and much more. If you want to prepare yourself not only for the new Apple Watch, but also for the iPhone X, iPhone 8 or iPhone 8 Plus, then I also recommend you this post Via Qi chargers for inductive energy transfer and wireless charging of your mobile devices such as smartphones, watches and headphones. There is even more information, data on the 38 mm and 42 mm versions of the Apple Watch 3, pictures and features on the official Apple product page.